The Ultrasonic HC-SR04 Sensor Module is a very popular sensor, it is used in many applications where measuring distance and detecting objects are required. Its works on the same principle as a radar system. Ultrasonic sensors work by emitting high-frequency sound waves, that is not heard by humans. It sends out a high-frequency sound pulse from the transmitter and then the receiver receives this sound when it reflects back from any object surface. This way the sensors detect objects. It can measure distance or detect objects in the range of 2cm-400cm. The is comfortable with both microcontroller and microprocessor platforms like Arduino, ARM, PIC, Raspberry Pie, etc.

The ultrasonic sensor working principle is the same as like object detection system of a bat. Also, we can say that it works on the same principle as a radar system. The ultrasonic or HC-SR04 module has two main parts, one is the Transmitter (TX) and, another one is Receiver(RX). The transmitter sends Ultrasonic (US) sound and the Receiver receive the US sound.

First of all, we need to set the Trig pin on a High State for 10 µs (microseconds) to generate the ultrasonic sound. Then it will send out an 8-cycle sonic burst which will travel at the same speed of sound. If the 8-cycle waves fall on any object and it bounces back from the object surface, then it’s collected by the receiver part of the module. As a result, The ultrasonic sensor echo pin produces a high pulse output. The output pulse duration is the same as the time difference between transmitted ultrasonic bursts and the received echo signal. 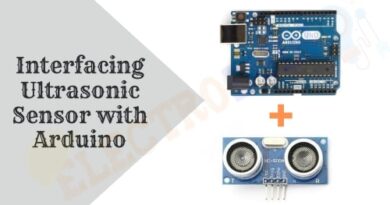 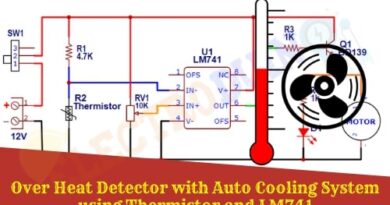