This project is sponsored by pcbway.com. It’s a Professional grate PCB prototype service company. They are providing you 10 high-quality PCBs at only 5$. At first register on the website, then fill in all the specifications like Dimensions, Layers, Thickness, color, and Quantity. In the last upload your Gerber files and place your Order Now. After completing all the processes, they produce your PCB prototype within 24 hours.
So, order now to get high-quality PCB prototype quickly from pcbway.com

In our day-to-day life crime is increasing rapidly, so one of the important things is the security of our home, office, and shop from thieves/burglars. There are different types of home security systems available in the market including several security features like fire, LPG, electronic door lock, heat, smoke, temperature, etc.
In this project tutorial, we will be going to design a Home Security System using PIR sensor and GSM module which detects intruders and informs the owner. This system/device detects thieves/burglars when they try to enter the house and informs the owner by sending text messages on her/his phone.

For this project you should know:

This GSM Based Home Security System project has been implemented on a very simple concept and it’s very easy to build. The fundamental components of this project are the PIR sensor, Arduino, SIM800L GSM Module, LED, and Buzzer.

PIR sensor detects the motion of surrounding objects by sensing the difference in infrared or radiant heat levels emitted by that objects. It produces high output by detecting the movement of any objects or human body in front of it. Here it is used to detect thieves/burglars (any human beings). When someone comes in front of the sensor, it detects motion and provides a high output voltage. This output voltage goes to the Arduino. Here we will use Arduino UNO which is the main microcontroller of this project, it controls the whole system. When the Arduino read this high output voltage, then it sends commands to the GSM module for sending a Text Message/SMS to a specific user’s Mobile number. The LED and Buzzer are working as warning indicators, which alert us when someone tries to enter the house.

First of all, the Arduino makes the connection to the Network with help of the SIM800L GSM Module.

At the same time, The PIR sensor requires a “warm-up” time of 20 to 60 seconds to proper operation. This time is required because the PIR sensor has a settling time duration, during this time it calibrates according to the environment and stabilizes the infrared detector.

We need to install the GSM Based Home Security System circuit/device at the entrance of the house, where have a chance to enter the thieves/burglars.

When someone comes in the detection range of the PIR Motion Sensor, then it detects motion and produces a High (5v) output signal from its output pin.  The Arduino reads this high output signal and it realizes someone has come in front of the sensor. Now, the Arduino communicates with the SIM800L GSM module via serial communication to send Text Messages to the owner’s mobile number. The mobile number has pre-programmed in code, you can change it in code.

At the same time, the Red LED and buzzer also turn on, these warn the owner that someone (thieves/burglars) has come in front of the Door (Sensor). 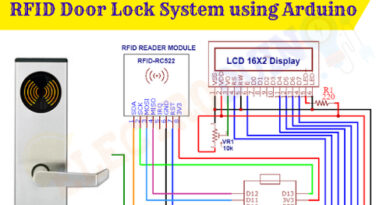 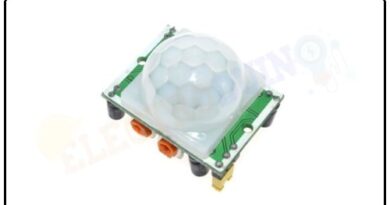 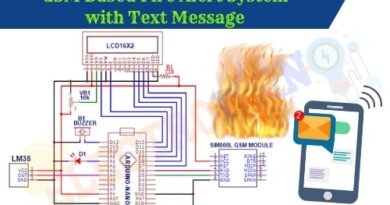